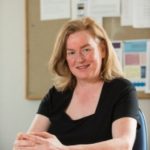 The 2014 emma Award for Excellence is given to, Gillian Doyle, Professor of Media Economics and Director of the Master’s degree programme in media management at the University of Glasgow.

Gillian Doyle has already accomplished more since she began her academic career in the late 1990s than many have accomplished at much later stages of their careers. It is fair to say that our 2014 recipient has made and continues to have a major impact in defining and establishing this field, in developing our scholarship both in substance and quality. She is producing a rich opus of published contributions that are helping to mature our theoretical foundations. She is also an appreciated educator and effective administrator.

Gillian Doyle earned a Bachelor’s degree with Honours in economics and philosophy at Trinity College in Dublin in 1986. She was awarded the Ph.D. from the University of Sterling in 1998. Her dissertation is titled: The Economics and Regulation of Concentrations of Media Ownership. She is currently the Director of the Centre for Cultural Policy Research at the University of Glasgow and the Principle Investigator for no less than three major funded research projects currently underway in the UK: 1. Converging Technologies and Business Models, funded by the Arts and Humanities Research Council 2. UK Film Council: A Case Study of Film Policy in Transition, also funded by the Arts and Humanities Research Council 3. Multi‐platform Media and the Digital Challenge: Strategy, Distribution and Policy, funded by the Economic and Social Research Council.

Gillian Doyle is a Visiting or Guest Professor and Invited Lecturer at three institutions with an important history in our Association, the University of Oslo in Norway, the University of Navarra in Spain, and the University of Paris 1, Sorbonne France. Her visitation at Oslo has continued since 2004, and at Navarra since 2011. Gillian is a founding member of the European Media Management Association. She has produced influential scientific reports for policy makers, either commissioned individually or as the Chair of a work group. These institutions include the  European Commission, the Organisation for Economic Cooperation and Development, and the Council of Europe. The topics have been about International Trade and Cultural Policy in Audiovisual Services, the development of Media Pluralism Indicators in EU member states, and Media Concentration in Europe. Always the emphasis of her work has been about the role and impact of pluralism and ensuring media freedom. Gillian serves as an editorial board member for quite a few important journals, including: The Journal of Media Economics, The International Journal on Media Management, The Journal of Cultural Economics, Journalism: Theory, Practice & Criticism, Media & Cultural Politics.

She recently published the second edition of a book that has become essential reading in the field, titled: Understanding Media Economics. She has no less than six publications currently forthcoming in peer‐reviewed journals and edited books, and her Curriculum Vitae specifies 44 publications she has either authored or co‐authored since 1995. Her publications appear in diverse journals including: The International Journal on Media Management, The Journal of Media Business Studies, The Journal of British Cinema and Television, The Journal of Cultural Economics, European Studies, Media Perspektiven, Sociology Review, Media, Culture & Society, Journal of Communications Law.