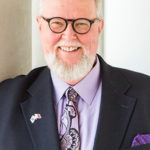 As President of emma, it is my great honor and privilege to announce the recipient of this year’s emma Award of Excellence. The award is given to someone in recognition of her or his outstanding contribution to our scholarship and community.

As you may know, the recipient of the Award does not yet know that she or he will be given this award today. This always comes as a surprise. Usually, this presentation follows a certain narrative arc that builds the excitement at the beginning by providing some hints about who the recipient might be, without actually revealing the name.

For some reason, this is difficult this year. No matter how I start off, and whatever clues I provide, I am sure that many of you will immediately know who I am speaking about because this person is such a well-known, well-liked and esteemed figure in our Association and scholarly community.

So, I will dispense with the hints this year and simply say:

Ladies and Gentlemen, please join me in congratulating the 2018 emma Award recipient:

Presenting this speech and this award to Dr Lowe is especially meaningful for me, personally. I first met Greg through emma a few years ago, when we worked together on the emma board for three years while he was the President, and I was first Conference Host and then his Deputy. Through that work, we got to know each other, and I can say that I would not be standing here in that position if it wasn’t for his guidance. He gave me responsibility, supported me, guided and advised me – and continues to do so today.

I know that I am only one of the many people in this room and in our scholarly community whom he has helped by lending a welcoming hand and giving us the opportunity to grow by contributing to our field and community.

Greg is warm-hearted and charismatic, and his energy fills the room. He is very engaged in and committed to our community. He feeds our self-understanding and reflections on our scholarship by setting topics and asking – as he did, for instance, in the book that he edited with Charles Brown – What’s so special about media management? Both editors donate the yearly royalty fees of this very successful book, published by Springer, to our Association.

Greg is the author of 10 edited books and ebooks, and has published extensively on topics such as managing firms and public service media, media finance, cross-border network issues, convergence, and the challenges for theory development in the field.

Greg is here today with his wife Anne, who accompanies him on so many of his conference travels. Wherever the two of them arrive, there is always a smile and shared laughter. And they do travel a lot, especially now that they have moved to Qatar, where, after 21 years in Finland, Greg has been appointed Professor in Residence and Director for the Communication Program at the Northwestern University International Campus in Doha.

Previously, Greg was Professor of Media Management at the University of Tampere in Finland. Before he re-joined academia, he was Senior Advisor for corporate strategy and development at the Finnish public broadcaster, YLE, for ten years. During that time he also served as the designer and head of YLE Program Development.

Originally from the United States, Greg has extensive experience in American radio broadcasting. He holds a PhD from the University of Texas in Austin and an MA from Ohio State University.

Greg has significantly contributed to the research and development of European public service broadcasting. Public Service Media is clearly very dear to him. Greg – as a voluntary service – manages the RIPE initiative, a collaboration between media scholars and strategic managers working in the public service media. As RIPE Continuity Director, his role is mainly to secure the continual development of this initiative. Greg also serves as the series editor of the RIPE Readers published by Nordicom. The eighth and latest book in this series is entitled Public Service Media in the Networked Society.

Greg is passionate about our field and serves it on so many fronts. In May of this year, he was elected Chair of the World Media Economics and Management Conference during its biannual conference in Cape Town, succeeding Robert Picard.

And, as you know, he is also deeply committed to this association. Greg served emma as Deputy President from 2010 to 2012 and President from 2012 to 2016. Under his leadership, emma further developed toward becoming the world’s leading association in the field of media management. In this period, emma became legally incorporated and the Journal of Media Business Studies, published by Taylor & Francis, became our flagship journal.

Whatever Greg does, he does it with great dedication and enthusiasm. And he finds joy in sharing his joy with others. This also goes for good food and good music. Greg enjoys good food, and could himself be a chef, judging by his nearly scientific approach to cooking. Greg also enjoys good music and loves to sing and play his guitar. And as those of you who attended the emma conference in Tallinn will remember, he is really, really good at that.

Greg is an outstanding scholar, a great people person, a good entertainer, and very determined to contribute to our field of scholarship and our community. We are very lucky, Greg, to have you in our midst.